In the past week, Delta Air Lines’ DAL management announced that it intends to boost its workforce by hiring 1,500 flight attendants in the summer of 2022 to meet the anticipated increase in air-travel demand. Meanwhile, Southwest Airlines’ LUV pilots opted for the legal route against the company alleging that the latter brought about some changes in their pay and working conditions without negotiations during the pandemic.
The European low-cost carrier Ryanair Holdings’ RYAAY August traffic was impressive as widespread vaccination in addition to the relaxation of restrictions in the EU led to an uptick in air travel.
1. Following the latest announcement to hire flight attendants, Delta, currently carrying a Zacks Rank #3 (Hold), will have 3,000 flight attendants for the summer of 2022. This is because it had recruited 1,500 flight attendants last year before the pandemic struck. The airline requires all new recruits to be fully vaccinated before their training starts.
Delta was also in the news when it announced that its unvaccinated employees will have to pay $200 more per month for their company-sponsored healthcare scheme. The surcharge will be effective Nov 1.
You can see the complete list of today’s Zacks #1 Rank (Strong Buy) stocks here.
2. The lawsuit filed by the Southwest Airlines Pilots Association in the federal court in Dallas claims that the airline “significantly altered working conditions, rules, and pay rates for pilots” sans negotiations. Per management, measures taken by the company to tackle the coronavirus-induced challenges did not require any discussion. The pilots’ union is seeking an injunction so that the company restores the terms of their collective bargaining agreement.
3. Reflective of the improving air-travel demand scenario in the European Union, Ryanair’s August traffic surged 58.6% year over year to 11.1 million. Load factor (percentage of seats filled with passengers) in the period was 82% compared with 73% in August 2020. The airline operated more than 71,000 flights last month. That the August traffic report will be impressive was hinted at by its CEO Michael O’Leary as reported in the previous week’s writeup.
With travel demand continuing to recover, Ryanair announced 14 new routes from London as part of its winter 2021 schedule.
4. United Airlines’ UAL Boeing 777 jets, one of which was involved in the emergency landing at the Denver International Airport in February, remain grounded as the Federal Aviation Administration (FAA) continues to review the Boeing 777-200 planes with Pratt & Whitney engines, per a Reuters report. The jet involved in the United Airlines’ Denver fiasco was powered by a Pratt & Whitney engine.
The aircraft had to make an emergency landing at the Denver International Airport after one of its right engines failed soon after the take-off. The plane was headed to Honolulu. Following this flight scare, United Airlines stopped operating the 24 such jets in its fleet post the FAA order that the planes required inspections. According to the Reuters report, The Wall Street Journal reported that United Airlines’ 777 jets may not fly until early 2022.
5. In a customer-friendly move, Alaska Airlines, the wholly-owned subsidiary of Alaska Air Group ALK, unveiled a new lounge at the San Francisco International airport (SFO). The space offers a variety of facilities like espresso drinks and a play area for kids. The latest is an addition to the seven lounges, already operated by Alaska Airlines across the United States
The following table shows the price movement of the major airline players over the past week and during the past six months. 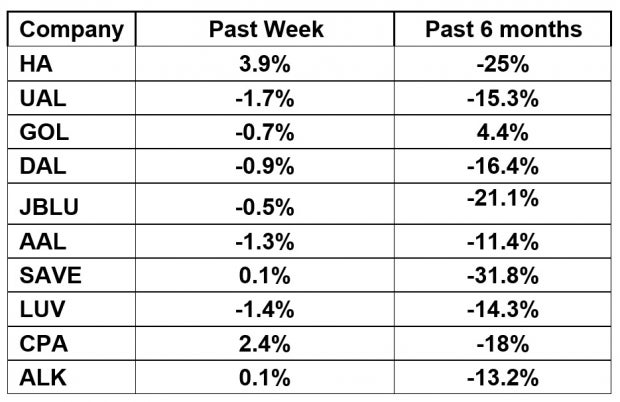 Image Source: Zacks Investment Research
The table above shows that the majority of stocks have traded in the red in the past week, even though the losses were muted in nature. Consequently, the NYSE ARCA Airline Index was flat at $92.07. Over the course of the past six months, the NYSE ARCA Airline Index has declined 14.4%.
With air-travel demand improving in Latin America, the August traffic report of Gol Linhas GOL will be keenly awaited in the coming days.

More Stock News: This Is Bigger than the iPhone!
It could become the mother of all technological revolutions. Apple sold a mere 1 billion iPhones in 10 years but a new breakthrough is expected to generate more than 77 billion devices by 2025, creating a $1.3 trillion market.
Zacks has just released a Special Report that spotlights this fast-emerging phenomenon and 4 tickers for taking advantage of it. If you don’t buy now, you may kick yourself in 2022.
Want the latest recommendations from Zacks Investment Research? Today, you can download 7 Best Stocks for the Next 30 Days. Click to get this free report