It’s late in the day on a Friday so I’ve decided to tackle two stories in one article. I’ve never done this before but I own the website so who’s going to stop me? In my defense, both stories involve celebrities and private jets, so I’m not being totally insane.
First up:

No. But he did buy a really cool private jet.
The internet has been abuzz today after hearing that Ludacris may have bought a $20+ million private jet.
The rumors started buzzing Thursday evening after Luda himself posted a series of photos and videos to Instagram in which he seemed to announce that he had purchased what appears to be an extremely nice private jet. Below is the video where Luda gives a tour of the plane that is, appropriately, JET black. Luda captioned the video with:
“Bought myself a little graduation gift. #familyupgrade #motivation.“

Several news outlets, notably TMZ, reported that Ludacris bought himself the jet as a graduation present for receiving an honorary degree in Music Management from Georgia State University.
TMZ also claimed that Ludacris was upgrading from a $20 million Hawker 700 private jet. The implication being that his new plane cost way more than $20 million.
Ludacris may indeed have been upgrading from a Hawker 700, but there’s no way his former jet cost $20 million. Hawker 700s were manufactured from 1977-1984. A brand new Hawker 700 off-the-line would have cost $4 million in 1984. Today a used Hawker 700 would cost $900,000 – $1.6 million depending on mileage, condition and amenities. You can get one for as little as $400,000.
So let’s assume Ludacris is upgrading from a $1 million Hawker 700 to whatever plane that is in his video.
I just spent 30 minutes trying to figure out what kind of jet Ludacris just bought. And I think I nailed it. I actually think I found not just the model, the exact plane.
One big clue is that his new plane has a lot of windows. Way more windows than you would find on any Gulfstream or Hawker or Citation. Based on this clue, a little more digging led me to believe that Ludacris just bought a Dassault Falcon 900.
A good-condition Dassault Falcon 900 would cost $3 – $4 million.
Here’s a photo of a Dassault Falcon 900 photographed on a runway in Cannes, France in 2014. Does this look familiar?
Compare the jet in the photo above with the one in the background of this photo from Luda’s Instagram. Note the number of windows and the paint job, mainly the grey trim:

I think that’s literally the same plane. In fact, I found some interior shots of the Cannes plane and I’m 99% sure it’s the same plane.
If I’m correct, Ludacris just bought a 14-passenger 1984 Dassault Falcon 900, tail number G-HMEI. According to aircraft.com Luda’s plane was completely refurbished in 2013. As we stated previously, a Dassault Falcon 900 would cost between $3 and $ 4 million.
Still a very impressive upgrade and acquisition for Ludacris, but I want to be clear that it’s not likely that he just spent $20+ million on a plane. After all, that would be nearly all of Ludacris’ $30 million net worth.
Story #2:
Yes.
The New York Times published a story today about a secret meeting between Elon Musk and Twitter’s top executives that took place last Friday at Twitter’s San Francisco headquarters. One of the juiciest tidbits from the Times’ article is the fact that Elon flew on his $65 million Gulfstream G650 to the meeting. Normally that would be no big deal, but the Times found the flight logs which showed Elon flew to San Francisco from…
SAN JOSE.
For those who are not familiar with Bay Area geography, in heavy Friday afternoon traffic drivinge from San Jose to Twitter’s headquarters would take one hour.
Elon’s flight took NINE MINUTES.
According to flight trackers, Elon took off from San Jose at 4:05 PM and landed at SFO at 4:14 PM: 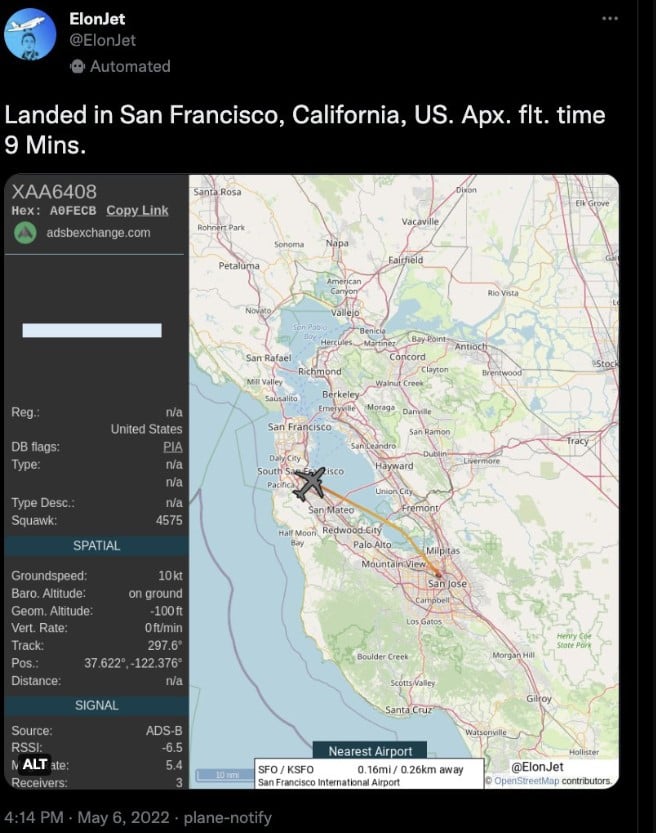 For a guy who literally owns an electric car company and is trying to save the planet, this seems like… maybe not the most earth-friendly way to travel?
But he is a busy guy and he’s done more for humanity than most in this realm, so I’ll give Elon a pass on this one.
Have a good weekend!
© 2022 Celebrity Net Worth / All Rights Reserved