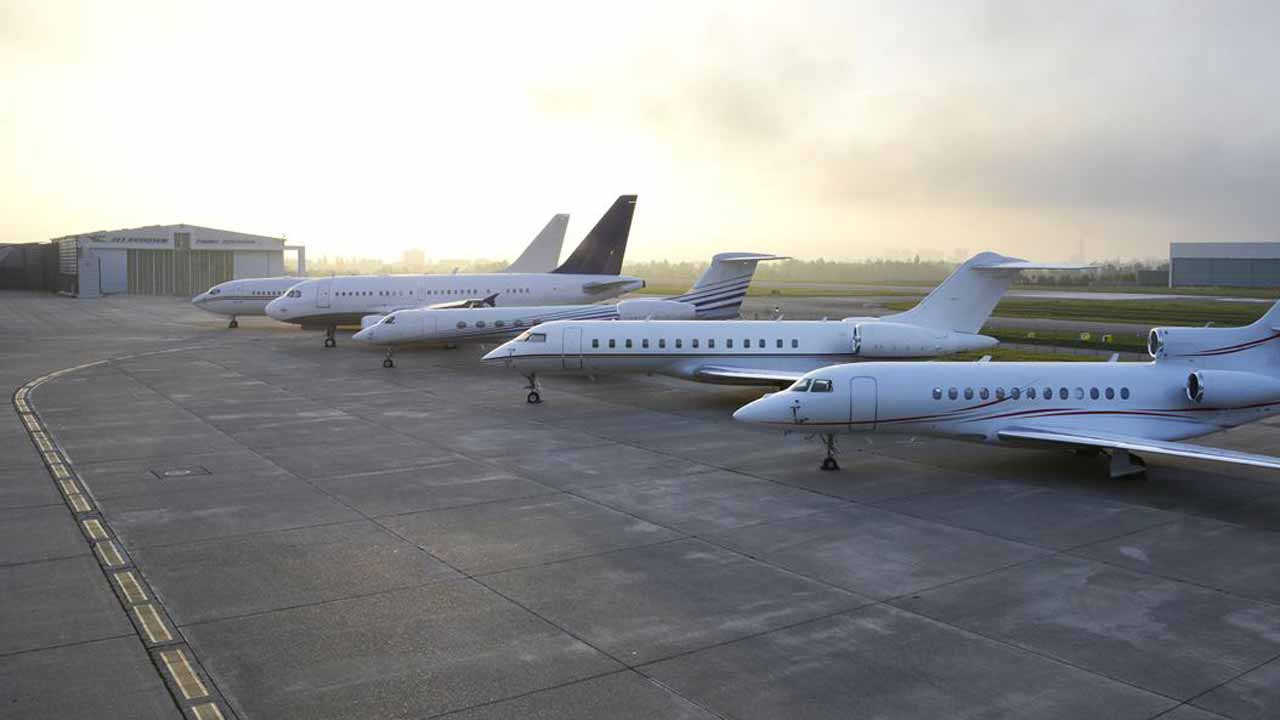 • Only 46 private jets are active, others scramble for survival
• Over 45 aircraft inactive, 30 in Customs’ duty defaults
• Owners boycott aviation rules to operate foreign-registered jets locally
• NCAA’s new regulations will close gaps, tackle illegal operations, DG says
PHOTO:JETAVIATION
Economic dire strait in which average Nigerians find themselves may have caught up with the wealthiest and nouveau riche, pushing many into bankruptcy.

Private jet services, a pre-pandemic plaything of very rich and classy Nigerians, have dipped severely. Most of the expensive ‘celebrity birds’, The Guardian learnt, are now an albatross on the wallet of their owners.

With lockdowns and inability to use the aircraft since the onset of the COVID-19 pandemic, leading to rising maintenance costs of about $4 million depending on the nature of the exercise and size of the aircraft, private jet owners are groaning under the burden of such costs.

Indeed, the present challenge has led to a drastic reduction in the number of private jets in the country, declining from over 200 in 2015 to about 95 today, out of which only 46 are active.

Operators too are deploying creative measures to cope with the trying times and drawn-out debt crises, though in a flagrant violation of civil aviation rules.

Besides evading duties due to the Federal Government, more owners are boycotting local rules to retain foreign registration numbers.
Most disturbing for the sector is the illegal use of private jets for commercial and chartered operations – an encroachment into the turf of licensed air transport operators.

The apex regulator, Nigerian Civil Aviation Authority (NCAA), acknowledged some of the gaps that are consistently explored by some operators, though it assured that regulatory efforts were on to block loopholes and check illegalities.

Losses accrued to scheduled commercial aviation in Nigeria, due to the COVID-19 pandemic were put at $994 million in 2020. The International Air Transport Association (IATA) that measured the impact added that no fewer than 125,370 jobs were affected, with loss of contribution to the Gross Domestic Product (GDP) in excess of $885 million.

More expensive General Aviation segment, which shelters private jet operators, appears to feel the pinch the most. Chief Operating Officer of the Private Jet Nigeria, Omotade Lepe, said the sub-sector has lost between $1 billion to $5 billion to the pandemic, which silenced the erstwhile luxury market.

Lepe said the pandemic period has been the most challenging for operators as the sector suffered revenue loss, decline in flight requests and fixed overhead running.

His estimate may not be out of place. The Nigerian airspace used to be a ready market for some of the most expensive jets emerging from manufacturers like Bombardier and Hawker Beechcraft Corporation.

On parade for about six years were Gulfstream jets that range between $15 million to $80 million, Hawker series of between $15.3 million and $34 million, Challenger Global 5000 offered for $50 million to $59 million each and Falcon 7x that sold for $49 million, among others.

Those are new planes. Second-hand jets were also on offer, ranging between $1 million and $15 million – for the most affordable. Their maintenance cost a year goes for between $500,000 and $4 million – whether flown or not!

Today, not many of those luxury jets have taken to the sky in the last one year, yet racking up heavy billings daily. For instance, two popular politicians that have a fleet of about eight exotic jets between them have grounded seven lately.
Among them are two Gulfstream G650s that each sold for $73 million. That is a heavy loss of revenue for the operator, crew and ancillary service providers.

An Air Operating Certificate (AOC) holder stated that except for the very top politicians, business moguls and few mega pastors, the private jet business is almost dead in the country.

“I don’t think it is all about the dip in fortunes. That may be true for first-time owners that just realised how extremely expensive it is to operate one. For others, it is more about the downtime in global businesses, risk of exposure to COVID-19 and the hurdles of scaling travel restrictions overseas.

“So, if it is not an emergency, like medical, business-related and meetings of the very big boys in Johannesburg, Dubai or London, our rich now rarely jump on the jet for the fun of it like we saw in the past.”

NCAA records also affirmed the slump in general aviation, indicating about 95 aircraft in the country, out of which 46 are active as at June. However, of the 95, a total of 72 are still registered abroad, in violation of the extant rules.

The Nigerian Civil Aviation Regulation (NCARs) 2015, Part 8.2.1.9 allows foreign aircraft to operate locally for two to 12 months and an initial renewal of another six months to complete local registration.

Operators have, however, found a way around that requirement, going in and out of the country to evade local registry.

An operator told The Guardian that most private jet owners would continue to domicile registry abroad due to the economic benefits accruable.

“Most of our aircraft that we operate on behalf of clients are registered in South Africa or Europe. That is where the real business is, if you ask me. First, aircraft that are registered there have good second-hand value. As an owner, you can easily trade it for another and at a fairly good price.

“Second, the amount we pay on insurance premiums is cheaper in those places. These two advantages are not possible in Nigeria. To be registered in Nigeria is already a minus, and you will pay almost times-five on insurance because we (Nigeria) are seen as a high risk region,” he said.
SIMILARLY, the Nigeria Customs Service (NCS) has found at least 30 out of 65 private airplanes, so far verified, to be in default of duty payment to the Federal Government.

They are planes that came into the country by Temporary Importation agreement, which allowed operators to bring jets without payment “because it was secured by a bond.”

Customs Public Relations Officer, Joseph Attah, said: “Thereafter, many of them failed to turn up to pay on the expiration of the agreement, which necessitated the verification.”

Another illegality charged against some of the private jet owners is the alleged incursion of business jets into charter operations and airlift of passengers for reward services.

The Nigerian Civil Aviation Regulations 2015, Part 18.2.3.1 stated that Air Transport Licence (ATL) holders and Airline Operating Permit (AOP) holders with valid Air Operators Certificate (AOC) are the only ones authorised to carry out charter operations in the country as no person shall use aircraft in Nigeria for hire and reward without the above requirements.

Mshelia, who is also the Chairman of West Link airline, said the NCAA and the Directorate of State Security (DSS) should go after such people for both security and economic infractions that deprive the sector of a mandatory five per cent Ticket Sales Charge (TSC), among others.

Mshelia said even passengers of those illegal operators were endangering themselves, saying if anything happened to them, “the owners of aircraft would leave as the aircraft was not certified for hire and reward and so would not even compensate them or their families.

“The fact is that the government should be more worried because it is losing a lot of revenues. I pay the five per cent Ticket Sales Charge (TSC), even if I don’t have the cash with me. I owe it and I must pay it. I can’t jump it. But those that are doing these sharp practices are not captured in the NCAA data. So, the NCAA cannot go after them.

“I think the Department of State Security should have intervened because this is purely economic sabotage for them to remain in this business for this long. I felt that if the Director-General of NCAA has full autonomy, then he would do his job without looking at the body language of the minister.”

Director-General of the NCAA, Capt. Musa Nuhu, said they were aware of irregularities and complaints about the general aviation, and were making moves to check all excesses through new regulations that are awaiting passage at the Senate.

Nuhu confirmed the gross violation of aviation rules with some private jet owners exploiting gaps in the civil aviation Act. He observed that though regulating “the black market” was tough, the NCAA has not relented in carrying out due investigations and issuing sanctions to violators.

“I must say a lot of operators have found a way to go around that requirement by going in and out, and cycling through the process continuously. Yes, it is a bit unusual where you have foreign-registered aircraft more than the Nigerian registered in the country, and we try to encourage the foreign-registered to de-register and register here in Nigeria.

“We are getting there but at a very slow pace and maybe they need to see a more stable macroeconomic environment so they can de-register and put in a Nigerian registration. A bit more confidence in the regulatory function will help do that. We try to work with them to see how they can de-register. I have seen a couple of requests for that and we are making progress,” Nuhu said.

Former Commandants of the Lagos Airport, in the 90s, Group Capt. John Ojikutu (rtd) said brazen excesses of private jet operators were alarming, though not new.

Ojikutu blamed both the NCAA and Customs for the abuses. “The Customs is culpable for waiting too long to call foul the acts of the aircraft owners and the NCAA. The NCAA should account for those that are operating commercial services with foreign registration numbers.

“In the days when I was the military airport commandant at Murtala Muhammed Airport (MMA), foreign registered aircraft must get security clearance, a limited number of periods to stay and must not operate beyond one local or domestic airport outside its international port of entry. The NCAA is in charge and they should take the blame for violations,” Ojikutu said.
To enable commenting and other interactive features, please switch to the more advanced .